The store will not work correctly in the case when cookies are disabled.

Mosses, lichens and algae are some of the earliest forms of life on this planet, preceding mankind by millions of years.  They have remained relatively unchanged during this period of time and range from simple single-celled algae to the somewhat more complex mosses.  These growths cause several problems.  They are living organisms which only require moisture, light and minute quantities of mineral salts to grow, however, they can grow on virtually any roofing material or surface.  Their root systems have the ability to bore into solid granite up to 12mm.  Therefore, once established on tiles, they allow the passage of water into the substrate which gives rise to frost attack and shaling of tiles.  These growths excrete acids, mainly oxalic, which attack the alkalinity of materials used, further weakening the tiles and bleaching the colour out.

Mosses will grow up under the laps and cause capillary attraction of rain water resulting in roof leaks.  When the mosses become large they are dislodged by heavy downpours of rain, resulting in the additional maintenance problem of blocked gutters.

Heavy moss contamination when soaked by rain will considerably increase the weight load on a roof.  Once established these colonies lead to the rapid deterioration and breakdown of roofing materials eventually necessitating costly replacement.

Over the last decade the incidence of roof contamination from mosses, lichens and algae has increased at an alarming rate.  In addition our climate is becoming milder and as a consequence these simple plant forms are able to survive and multiply.  Whereas in the past these growths have appeared predominately in rural locations, they have now encroached into inner-city areas and can be seen contaminating many house roofs and some of the most prestigious buildings in the land.

MGC is a unique Company which has specialised for over 50 years in the study of microbial attack on buildings.  Based on this experience MGC developed a range of systems and treatments to eliminate all types of moss, lichen and algae infections on all varieties of roofs and roofing materials.  These treatments not only eradicate the growths but protect the roofs from reinfection.

LICHENITE AND HALOSEAL is a simple, two-stage treatment for roofs infected with mosses, lichens and algae. LICHENITE is a colourless easily applied solution applied by brush or low-pressure spray to infected areas.  It is left on the surface for 72 hours to allow the root structures within the substrate to be killed off.  LICHENITE is approved under the Control of Pesticides Regulations 1986 (as amended) by the Health and Safety Executive.   HSE No. 3936.

HALOSEAL is a clear, colourless solution of complex stearates which has the ability to protect surfaces against water penetration and prevent the regrowth of mosses, lichens and algae for up to ten years.  It can be applied to asbestos, clay and concrete tiles, slates etc.  HALOSEAL penetrates into the tiles and protects against further deterioration and does not result in shiny tiles when dry.  HALOSEAL is micro-porous and can allow the substrate to breath.

LICHENITE AND ROOFCOAT FR10 is a simple two stage treatment for flat and low pitches roofs affected by mosses, algae and lichen. LICHENITE is a colourless easily applied solution applied by brush or low-pressure spray to infected areas.  It is left on the surface for 72 hours to allow the root structures within the substrate to be killed off.  LICHENITE is approved under the Control of Pesticides Regulations 1986 (as amended) by the Health and Safety Executive.   HSE No. 3936.

ROOFCOAT FR10 is a one part moisture curing polymeric waterproofing fibre reinforced compound which is elastomeric and has exceptional adhesion to virtually any roofing material.  It has been specifically developed to provide instant waterproofing for leaking roofs, is an all-weather product and can be applied even in the wet.  ROOFCOAT FR10 can be used to repair specific areas which are leaking or totally waterproof an entire roof.  Large cracks, holes, tears, blisters and splits can be easily repaired using ROOFCOAT FR10 and ROOFCOAT FR10 SCRIM.  The product is multi-purpose and can be utilised on a wide variety of problem areas. The ROOFCOAT FR10 SYSTEM is easy to use, does not require special primers and gives long term protection of up to 10 years. 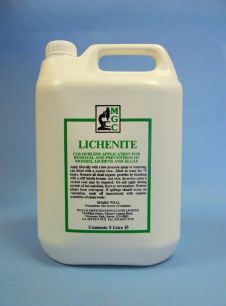 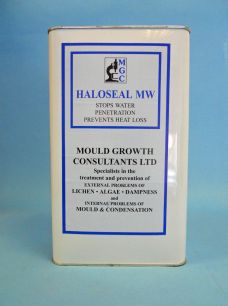 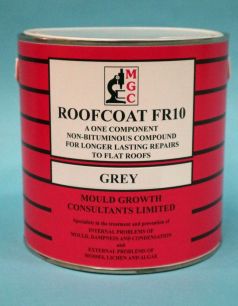 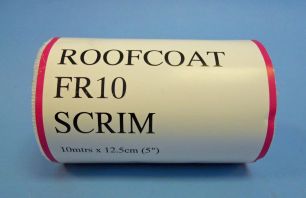 Need some advice? Speak to our friendly UK based team

What type of customer are you?

Click here to view our range of products and information for trade.